Rap Is Full are Ireland’s leading battle rap league. The first round of their current tournament, Destroy and Rebuild, took place at The International Bar in Dublin on September 28th. With a cash prize and a title match opportunity up for grabs, MCs from across the island, as well as overseas, travelled to spit poetic insults at each other. As well as the official judges, fans could vote in the polls for who they thought deserved to go through to the next round. To check out the battles and drop your own decision, join Rap Is Full on Patreon. This is our lowdown of what went down in Dublin…

A good showing from both battlers in Round 1, which we edged to Terminal. In Round 2 Terminal took a religion angle, exclaiming “While you were at home learning the gospel / I was out here earning apostles.” Jester Black showed lots of potential but his lines didn’t seem to connect with the crowd. He attempted to expose Terminal, but ended the round early on a stumble. In the third Jester Black struggled against more stumbles, but managed to regain some swagger, landing lines like “Fuck you and your soon to be broken face.” Overall, Terminal outclassed the newcomer with plenty of puns and projection.

Best bar: “You call yourself a lyrical hitman unironically. At first I thought the kid is just dense with the things that he says / But now I agree with you, it isn’t pretend / Cos you kill lyrics in a literal sense.” Terminal, R3

Both rappers are up-and-comers who are growing within the league. Northern Ireland’s Stray had a weak first round, easily outshone by Scabman’s witty multisyllabics. One of Scabman’s standout bars was “It must be shit battling with addiction / Knowing you’re only good at this battling, addicted.” Round 2 saw Stray improve, dropping harder punchlines, but many had been heard before. Scabman switched to heartfelt lyrics, but ran with the same drug angle as previously, and then again in the third. He still took the final round, which included the line “You lost, boohoo / When you’re gone these paws will be over your gaff like its Blue’s Clues.”

Haidees went first, and with as much confidence as a rapper of his calibre deserves. He got a good reaction from: “I thought by the time I came back I’d be so impressed and have seen him progressed / So far all I’ve seen him do is come up with nothing, like the placebo effect.” Newcomer Jimmy Rustler made sure to work the crowd at his own pace, delivering some haymakers amongst his humour. To begin Round 2, Haidees took a chewing gum from Jimmy, then spat it out and kicked it back at him. The disrespect continued, and his performance proved his experience. Jimmy opened with “Nice bars bro, did your mum write them for you?”, which earnt him laughs, and a choke. He recovered himself, but not all of his conviction. In the third, Haidees came with some hilarious storytelling. Jimmy Rustler dropped some funny gun-bar parodies, called out Irish legend Gwame, then choked again. Like a rapping South Park character, Jimmy Rustler was sarcastic and animated. He also showed off an ability to freestyle, but with too many chokes, he couldn’t take the win.

Best bar: “Claiming I’m some sort of rookie that’s facing a vet / You’ve been around five minutes, I go back with the pens and pencils like I was rewinding a tape in a deck.” Jimmy Rustler, R1.

The final battle saw the mighty Rapthor go up against Manchester’s Seano Mac. Rapthor kicked off Round 1 with paedo jokes, including “His girlfriend looks twelve, this shit’s X rated, don’t let them children watch it / He’s not Chronicles of Narnia, he’s got skeletons in the closet.” Seano began with a flip about the camera dying, and proceeded with clever writing. In the second round Seano had the room popping after: “You could blame it on the fact that you’re obviously writing wrong / Because you’ve never lost to an Englishman on Irish soil, but you lost to all the Irish ones.” Rapthor was really clowning in the third, digging at Manchester and calling Mac “Vanilla Spice”. Seano played the racist card, before displaying some smart lyricism, but eventually fizzled out with his “prehistoric” motif. This was a high quality battle from both sides, but for us, performance outplayed penmanship.

Best bar: “Go ahead and watch Lord of the Rings, Game of Thrones, or check the record itself / You’re acting up, for Sean Bean dying on cam’ more than everyone else.” Rapthor, R1.

Lizzie C unfortunately had to drop out, so Jonny Darko stepped in with inebriated freestyles. The battle was packed with slag lines and vagina gags, making it great entertainment, but a little outdated. Captivating delivery gave Jonny the first round, along with funny one-liners like “You know what’s amazing? / Your bird’s makeup. You’re very talented.” In Round 2, Intimidation looked intimidated, choking twice significantly. Jonny was on fire, seamlessly creating “I’m off me bleedin’ beans, six pints deep / Your girl thinks about me when she has a good night sleep.” Intimidation picked things up in the third, gaining confidence despite the circumstances. His jokes were finally landing, such as “I wanna fuck you Lizzie, I’ve had it with me missus / She tells me to put the toilet seat down, Lizzie stands when she pisses.” He also described Jonny’s “bitch” as having seen “more camel toes than an Egyptian vet.” If Intimidation’s original opponent could have made it, perhaps he would have won. But Jonny Darko is one of the best, sober or not.

Best bar: “Your last round was fucking shite, it started to subside and / He’s just taking it out on me because he didn’t make it to Love Island.” Jonny Darko, R3. 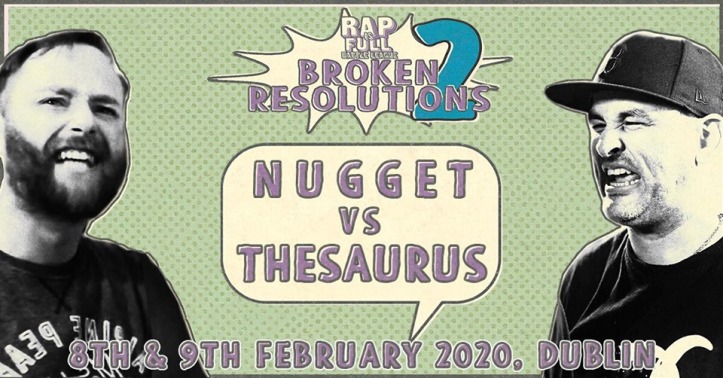 The official results are now available here. Make sure to catch Rap Is Full’s next event, Broken Resolutions 2. It could be Ireland’s biggest battle card yet, with a lineup already featuring three huge international bookings: Thesaurus, Red Flag and Tony D. They are up against Nugget, Jonny Darko and Terminal respectively. Destroy and Rebuild Round 2 will be held at The International Bar, November 9th. Support Irish battle rap, and join Rap Is Full on Patreon.