How to make a DnB banger with Heist.

From Transformers to tuition, we caught up with Heist, the jump-up heavyweight, to learn what it takes to make a tune. The veteran drum and bass producer has released a new sample pack to blow up your sound libraries.

Including components from his biggest belters, the 175 audio samples will help you create explosive bass tracks like the man himself, but adding your own twist. With risers, synths, digital blips and striking percussion for building drums, there’s plenty to play with. Available through bytheproducer.com, complete your arrangements with shuffling grooves and robotic effects originating from Heist’s personal hardware.

With over twenty years in the game, what is the most recent production tip you’ve learnt?

“I’ve recently been experimenting with modular synthesis. It’s ground that has been relatively unexplored to me until recently. Although a lot of people have deemed it a bit of a “rabbit hole”, I’m finding that once you are clear what certain modules do, it becomes quite logical. It’s early days but I’m enjoying the journey so far.”

Do you remember the first sample pack you copped as a budding producer?

“Yes, it was a sample CD by the company EastWest. The CD was called ProSamples Vol 3 – Drum & Bass.” 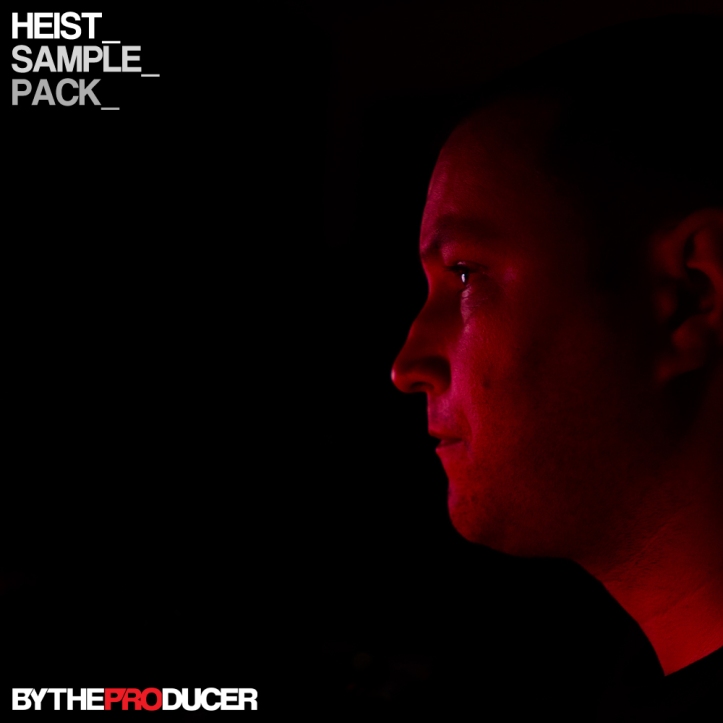 What advice do you have for producers using your new sample pack?

“Try your best to use them creatively. Put your own spin on them. Pitching them differently for instance. Another way would be using say one of my pads as a granular sampling source.”

Congrats on the release of your new album Iacon on Low Down Deep Records. Why is 2019 the year for your debut LP?

“Thank you. I felt that I was at a point on my journey as Heist and as an engineer that I felt ready to commit to a full album project. Your first album is an opportunity you only get once and I wanted to make sure I was in the best position possible to take full advantage of that.”

Iacon is a place on the planet Cybertron from Transformers, which is your favourite Transformer?

Is it Dillinja’s album Cybotron but for a new generation?

“No I don’t think that would be an accurate comparison. My album is tracks that are all aimed at the dance floor, which in my opinion is just what Cybertron was too, but the albums aren’t similar at all apart from that. When I was making the album I sited that fact as inspiration for what I wanted to do as an album, keep it aimed at the dance floor.”

Iacon full of cinematic soundscapes and video game vibes. Other than music, what media most influences your sound?

“I’m inspired by all sorts of things. Video games are definitely inspiring and even more fun to put a spin on to get them to fit in your composition like they were made for it. I’m also inspired a lot by ’80s and early ’90s TV. Things like Battlestar Galactica (the original – not the remakes), Manimal, Knight Rider, etc. Also old cartoons from my childhood like the original Transformers cartoon series, Dungeons & Dragons, Thundercats, Visionaries, there are so many! Sometimes it might be a small musical interlude between a scene that I sample. Other times it will be a voice or some dialogue.”

How is the sci-fi theme reflected in your sample pack?

“Some of the pad/atmosphere sounds are influenced by the musical interludes/movie sounds I mentioned above. A few of the key sounds are as well.”

You also offer private production tuition, are you now trying to grow the scene that helped you grow?

“I guess you could say I am, yes. I have been a part of the scene for a while now. There was a point that I was quite secretive about what I do to produce my music. As time has gone on I have lost this kind of attitude if I’m completely honest. I just think that I have quite a lot of experience and workflow that I could pass on to help others progress. It is actually very rewarding seeing people hold this workflow to better themselves and progress further into the scene with the approaches I’ve taught them. If anyone would be interested in finding out more about my 1-2-1 tuition the email is heist121s@gmail.com.”

What’s next for Heist?

“I have a fair bit in the pipeline. An EP project with T>I  for my label Co-Lab Recordings is nearly finished now. Also a single with Spaow is completed for Low Down Deep. I have a track done for a special Metalheadz album project. I also have five Heist singles ready to be released on Co-Lab as well as a few remixes too.”