Having finally scrubbed away all the dirt from Nass, (the UK’s biggest music and action sports festival), it’s time so see if we have any recollection left of the weekend’s greatest moments…

Starting things off in the festival’s dedicated hip-hop tent sponsored by Sika Studios, UK battle rap league Don’t Flop hosted a freestyle event to showcase the talents of rappers such as Impact, Cracker, Dekay and more. Performing to the earliest revellers, rappers competed against each other under new formats where they were challenged to spontaneously come up with bars on beat that incorporate lyrical suggestions from the audience and a white board. A unique event for Nass which proved to please the crowds through artist’s humorous freestyles and written performances.

After most tents were up and zoots were wrapped, nine-piece UK hip-hop/dub band The Mouse Outfit took to the main stage. They performed chilled hits such as ‘Sit Back’, ‘Step Steadier’, and ‘We Ain’t Goin’ Nowhere’ with a full band including rappers Dr Syntax and Sparkz in addition to musicians and DJs. Their eclectic sound influenced by both urban and world music rang through the arena bringing good vibes to those on skate explorations around the festival grounds.

Although drum and bass pioneer Andy C’s pumping headlining set may have been the more packed slot, experimental indie rock band Rat Boy put out the more exciting performance. Frustrated with such a small crowd, lead singer Jordan unleashed an arsenal of antics not similar to that  which is expected of Tyler, The Creator in order to bring havoc and energy to the set. Firstly, taking a skateboard from the crowd, Jordan landed a kickflip first try as he introduced the next song and urged the audience to clamber onstage to the fury of security. Then after destroying amplifiers and his guitar pedals, he could not return to play the track’s guitar solo since the equipment had been scattered. This was then fixed by the band’s forgiving stage team whist drummer Noah blasted through a thrashing solo, but it wasn’t long before things got out-of-hand again. Towards the end of single ‘Sign On’, “That dude in the England hat” was pulled onstage again after he had made it up and dived into the crowd earlier in the show. But this time security snapped and began to use him as a Stretch Armstrong as the band fought to keep him onstage. When a violent tussle broke out between Jordan and security, Rat Boy’s tour manager sprung between them and allowed Jordan to escape up a tower of speakers. The set was cut short and the mood of mayhem had been provoked…

Finally, drum and bass heavyweights SASASAS, (DJ Phantasy, Stormin MC, Harry Shotta, Shabba D, Skibadee & Macky Gee), were packing out their venue The Warehouse. Playing bangers from all of the group’s members, including their popular ‘Anthem’, the hanger was so rammed that sweat was condensing off the roof and dropping like rain onto the audience. With the room skanking and ‘Buss-ing it’ to the jaw-dropping evening set, many ravers seemed to even leave their jaws in The Warehouse.

After visiting Moonshine Skateboards’ 14ft vert ramp to watch the amateur heats as well as taking a trip to the incredible pro park for the inline heats, I bumped into rapper and founder of Dank Of England, Black The Ripper. Following this, I found myself talking to Don’t Flop’s Cruger and Impact for the second time in the week , (look out for a Reverb Music interview with Impact in an upcoming ‘Soundcheck’). Like a true fanboy I was already repping DF merch.

Grime phenomenon Big Narstie [read more] was then taking to the main stage to deliver a torrent of tunes alongside his recent ‘BDL Anthem’. All was popping until Narstie broke into an impromptu rendition of Oasis’ classic ‘Champagne Supernova’. Since few of the Adidas-clad crowd were large rock fans, a whimpering attempt was made by the audience whenever the mic was pointed to them to finish the song’s lyrics. All was made up for however when the hilarious icon brought on Kurupt Fm‘s DJ Steves to have a go on the ones-and-twos. The sets began to merge as Chabuddy G and the rest of the Kurupt FM entourage crashed on stage declaring the ‘Champagne Steamrooms’ event officially open. The parody group performed their own comedic tunes ranging from UK garage, grime and drum and bass, rendering the crowd in laughter whilst also finger-pistol shooting the air.

Saturday’s biggest crowd puller might have been grime sensation Stormzy‘s ‘lit’ main stage set. With the UK’s greatest contribution to the world in recent years being the spread of grime music,  ‘Stormzy tracksuits’ have began appearing amongst all demographics. Exclaiming “Hold tight all my Adidas gang” to an eruption of cheers, it’s clear that the MC’s sponsorship is paying off for both the artist and the brand. The set was explosive as he performed all the expected hits as well as tunes from other grime high-rollers such as Lethal Bizzle and Chip. 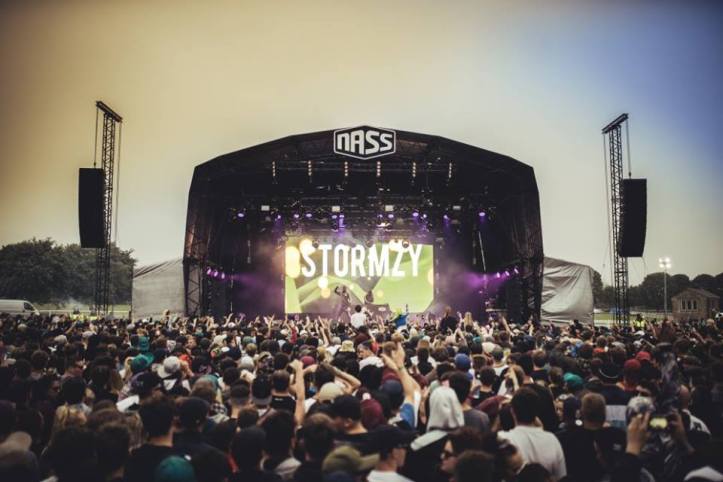 Following this, High Focus’ Leaf Dog and BVA MC [read more] were taking over The Hanger for over an hour of classics from their discographies within The 3 Amigos, The Four Owls, Brothers Of The Stone and their respective solo albums. The UK hip-hop dons smashed it as the enamoured audience relentlessly chanted every bar from the duo. Their collaborative track ‘Crazy Trips’ from BVA’s debut album seemed especially fitting for the intoxicated crowd. RLD prodigy Smellington Piff also arrived on stage and spat his own high energy verses to replace any tracks’ original features. Then, the outfit brought out fellow Four Owls member Verb T to an uproar of applause. The four rappers had the room folding like hole-punchers on every beat and closed the set with their DJ Premier produced banger ‘Think Twice’.

A visit to Nass’ 360 degree arena stage Southbank to catch Austrian production duo Camo & Krooked was next on the list. Named after London’s most famous skate spot, it was half way through the set when we discovered that the audience could surround the central DJs from all angles given the unique stage design. After the quality drum and bass set, Enter Shikari side-project Shikari Sound System were bringing hard tunes in the small Truck & Bearing stage. The live dance set featured samples and live vocals from the band’s own hits as well as mixing in electronic staples to keep the raucous atmosphere at 100%.

Finally, house and bassline producer GotSome took to The Warehouse for the late night final set. The room was rammed and it was if the rave was an ocean: each line of people was a wave flowing forward to the music and eventually lapping the front where driftwood (NOS canisters and Carlsberg cans) lay deposited by the tides. Suddenly however, the MC called security’s attention to a collapsed girl in the front row. As they attempted to continue with the set, security struggled to attend to the situation as they could not see through the crowds. Then, as the MC’s calls grew more desperate, four more individuals fell down in the same area. More attendants rushed to the scene with the MC demanding that ravers at the front stepped back away from the intense strobe lights. With a group of friends all being carried out in seizures the set was forced to end. The MC delivered an important message for all people to look after each other and to be safe by encouraging the whole room to grab hands with a random raver and spread love. Escaping the scare, Southbank was filling up with the fleeing Warehouse party goers. The night was to end with an uplifting set from dubstep veterans Caspa & Rusko who captivated every corner of the encapsulating venue.

Big ups all the gang @nassfestival. The room was to shut down early due crowed medical issues. Sorry 🚑 pic.twitter.com/FAbAaKbvJZ

After browsing the wavy garms stalls I found Leaf Dog and Verb T hunting for munch. Leaf then took my board and landed a kickflip and a few pop-shuvit variations whilst disclosing his advice for Reverb Music. He also informed me that Verb T would be hosting a showcase for his new label In The Balance Records later on at the Sika Stage so that’s where we headed next – the stage even had it’s own built-in mini ramp! Although few had made the rainy trudge down to the event, Verbs and his signings Morone and Chillman (amongst others) seemed to enjoy their performances. Similarly, despite the label being in the early stages of its development, it was great to see the culture and style of UK hip-hop being maintained by new artists. However, it was Verb T who stole the show by rapping chilled classics from the breadth of his discography including ‘Where You Find Me’ and ‘I Remain’.

Later, stumbling into the Truck & Bearing stage, The Lounge Kittens were singing Eminem’s ‘The Real Slim Shady’. The Lounge Kittens are a a comedy trio of female singers who cover popular and rock songs in the style of 1950’s lounge music. Their tight harmonies and humorous performance was a pleasant contrast to the majority of the weekend’s bass-heavy music. However, after their rockabilly cover of Limp Bizkit’s ‘Rollin’ it was time to leave. 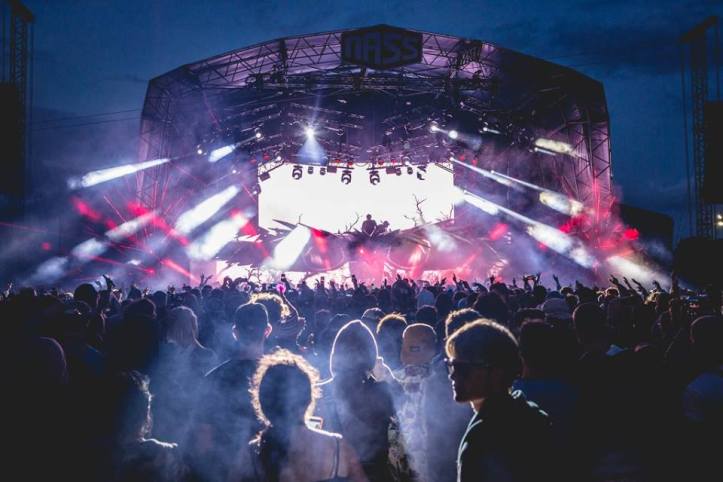 Following a disappointing set from chart favourite Wilkinson, EDM duo Knife Party had to do everything they could to turn attention back to the main stage. Given that both DJ’s were situated on top of a giant hawk with lights and branches striking from the wings it was set to be the festival’s biggest performance. Delivering an onslaught of drum and bass, dubstep and EDM bangers from their arsenal the DJs brought nothing but an incredible set. Including an ode to the members’ previous group Pendulum, they played a remix of their hit ‘Tarantula’ which really got the crowd jamming. Similarly, a remix of Red Hot Chili Pepper’s ‘By The Way’ was another highlight since it brought a sing-a-long element to the duo’s intense set before the hectic drop had mosh pits crashing all over the place.

Being Nass we cannot forget about the insane action sports that also occurred. BMX legend Mat Hoffman made an appearance to take to the vert ramp in a special demonstration where he managed to pull off many of the old-skool and new-skool tricks that he once invented. Likewise, the pro BMX competitions in the park, on dirt, on flatground and the vert ramp were all breathtaking. In addition, both the amateur and pro skaters tore up the park and vert. Moonshine Skateboards’ Jesse Thomas took the cup in the skate pro vert final with incredible runs and a lot of hair. Most impressive however was the run made by the six year old son of Mr Moonshine who endeavoured to drop in on the ramp seven times his height without bailing. 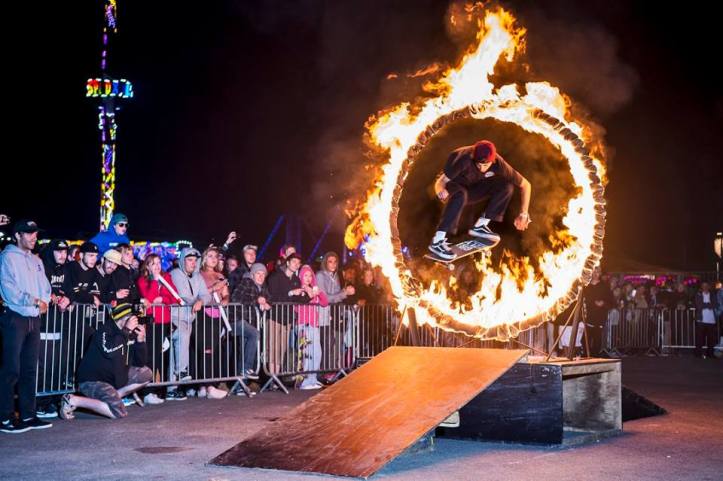 Ultimately, Nass was pretty gnarly. I’m unsure as to whether there was more dizzle or drizzle during the weekend but both the music and action sports were mad.